This is the second half of Kraftwerk’s ‘Trans Europe Express’ (TEE), In a nutshell: the Kraftwerk masterpiece had been on my list for about ten years to arrange for ‘early instruments,’ finally done a few weeks later, finished it up with the addition of the concluding ‘Metal on Metal’ half of the extended song. The full version is on the channel, and here is ‘Metal on Metal’ alone as a ‘heavy metal’ clavichord solo!

Now a word about clavichords. Yes, they are quiet, and certainly one of the quietest instruments around, but NOT the absolute quietest. And when you are sitting at, and playing, a well-built, well-tuned, well-regulated clavichord, and playing it well (!), it can have a lot of sound! Might not be so loud to anyone else around, but depends on the style of clavichord and its characteristics.

The instrument WAS sort of an acoustic accident. The sound you hear is just the peripheral sound of the ‘one half’ of a string vibrating when hit by a metal tangent. The other side is dampened by a piece of cloth. The tangent stays in contact with the string, so the string is never really freely vibrating. So, NOT a loud sound. Guitarist use the same technique by hitting the strings down on the fingerboard, and with the help of pick-ups, that sound can be heard well. The clavichord’s volume and tone depends on a well-designed and well-built sound-board, and a well executed finger attack on the key and string!

BUT, as the player, sitting at the keyboard, you can have plenty of sound, and for a small audience siting right behind and around you, no problem!

I usually mic my clavichords about 12 inches from the soundboard, about level with my right ear. At a reasonable volume, my recording should sound like it would to you, if you were sitting next to me? And you are welcome to turn it up or down, but except for the low fidelity of my cam-coder (to make the vids), this is what a clavichord sounds like when played just in front of you!

Back to ‘Metal on Metal.’ Imagine that you are sitting right in front of the clavichord, perhaps even playing it. The recorder-players are behind you on the right, the viols behind you over on the left, and the bass guitar, percussion, hurdy-gurdy, and organ are in front of you, behind the clavichord along the wall of your resonant music room…this recording is a good realistic version of just what that would sound like. At a reasonable volume, very realistic of a true acoustic performance! Turn it up if you want to imagine that everyone has a mic in front of them, and the ensemble is amplified? Why not? Heavy ‘Metal on Metal!’

This is the second half of Krafwerk’s ‘Trans-Europe Express.’ On a modern CD, it is a separate track from ‘TEE,’ and one can start with a click, right on the down-beat of ‘M on M’ without any ‘TEE?’ That is what I have here. NOW, Kraftwerk does NOT use a clavichord for ‘M on M!’ They use electronic percussion, and all their synthesizers, and computers, and the piece goes on for a while, until ‘TEE’ sort of comes back into the sound-picture, and the track ends as the completion of ‘TEE.’ So, here too, after a minute or so, some of the themes and words from ‘TEE’ are back in to join the clavichord. And the drum, organ, and bass guitar help out a bit from the start. But darn, this is a good, honest, rather heavy ‘Metal on Metal,’ done as a clavichord solo. And lots of nice vibrato, eh?

The clavichord sound, as mentioned above, is metal tangent hitting metal string, and the name of the piece gave me the idea to arrange the Kraftwerk version as a clavichord solo. I am very pleased with the results, and hope you are as well. Clavichords can and do rock! 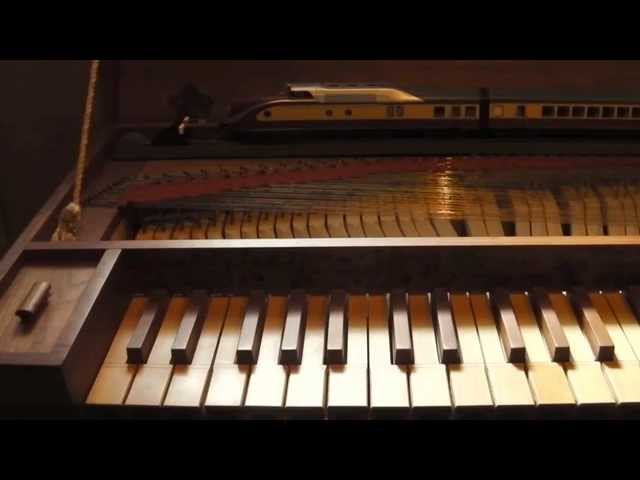 OK Go – Upside Down & Inside Out